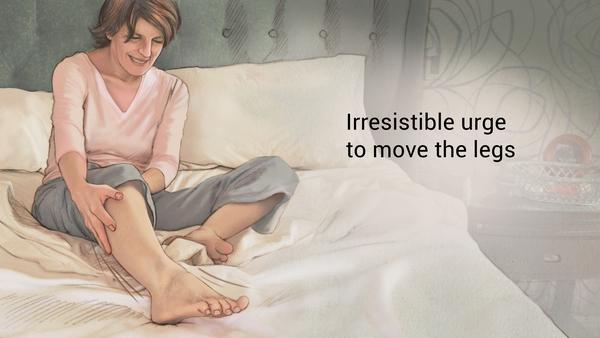 Restless legs syndrome (RLS) is a sleep disorder in which a person has unpleasant feelings or sensations in the legs. These feelings are described as creeping, crawling, tingling, pulling, or painful. While these sensations happen most often in the calf or lower leg area, they can be felt anywhere from the ankle to the upper thigh. RLS symptoms can occur in one or both legs and can also be felt in the arms. These symptoms occur most often when lying down, but can also occur when sitting for long periods of time, such as at a desk, riding in a car, or watching a movie. People with RLS talk about having an irresistible urge to move the legs. Moving the legs, walking, rubbing or massaging the legs, or doing knee bends can bring relief, at least for a short time.

Unlike other conditions, Restless Leg Syndrome symptoms get worse when relaxing or lessening activity, particularly during the evening and nighttime sleeping hours. Many people with RLS have trouble falling asleep and staying asleep. If not treated, it can cause extreme tiredness and daytime fatigue. A person’s job, personal life and daily activities can be strongly affected due to exhaustion. A person can lose their ability to focus and have memory loss.

Many people with RLS also have a related sleep disorder called periodic limb movements in sleep (PLMS). With PLMS, a person jerks or bends their legs unintentionally during sleep. These movements can happen every 10 to 60 seconds, or hundreds of times, during the night. They can wake a person, disturb sleep, and wake bed partners. People who have both RLS and PLMS have trouble falling and staying asleep and can have extreme sleepiness during the day.

Who has Restless Leg Syndrome?

Deltasleeplabs.com found that Restless Leg Syndrome affects about 2 to 15 percent of Americans. But, it may actually affect more people. Some people with Restless Leg Syndrome do not seek treatment because they fear they won’t be taken seriously, their symptoms are too mild, or that the condition can’t be treated. Health care providers sometimes think the symptoms of RLS are caused by something else, like nervousness, insomnia (Link to Insomnia page) (not being able to sleep), stress, arthritis, muscle cramps, or aging.

RLS is thought to affect women more often than men. It can start at any age, even in young children, but most people with RLS are middle-aged or older. And, older people with RLS have symptoms more often and for longer periods of time. Young people who have RLS are sometimes thought to have “growing pains” or may be considered “hyperactive” because they cannot sit still in school.

RLS symptoms are not the same for every person. They range from uncomfortable to painful and can vary in frequency. A person can have periods when RLS does not cause problems, but the symptoms usually return. Another person can have severe symptoms every day.

In most cases, the cause of RLS is not known. For about half of all RLS cases, there is a family history of the condition. People who have RLS in the family tend to be younger when symptoms start and develop symptoms slowly.

RLS is thought to be related to the following factors or conditions:

There are no tests for RLS. It can be hard to diagnose and is easily confused with other conditions. When someone with RLS goes to see a doctor, there is often nothing wrong that the doctor can see or detect with a physical exam. Diagnosis, therefore, depends on what a person describes to the doctor. To help make a diagnosis, the doctor may ask about all current and past medical problems, family history, and current medications. A complete physical and neurological exam may help identify other conditions that may be linked with Restless Leg Syndrome, such as nerve damage (neuropathy or a pinched nerve) or abnormalities in the blood vessels. Basic lab tests may be done to assess overall health and to rule out anemia.